Here’s another spring (and summer and maybe even fall) flower you’ll see in quite a few national parks: Indian paintbrush (aka scarlet paintbrush, magenta paintbrush, pumice paintbrush, etc. etc.). Here’s an interesting little fact that you would have picked up if you’d read my National Parks Quiz and Trivia Piece #28: the paintbrush flower is quite opportunistic, digging its roots into neighboring plants to steal their nutrients. This plant, therefore, is hemiparasitic – it has chlorophyll, so it doesn’t get all of its nutrition from other plants.

The next time you are out in a park, or even when you look alongside the road and you spy a paintbrush flower, look around to see if there are other flowers nearby. You’ll usually (not always, but usually) see Indian, scarlet, magenta, or pumice paintbrush quite close to other flowers and plants.

Oh, and if you are interested in looking at that wildflower quiz, then click on the image above.

Comments Off on April Showers Bring May Flowers Part II

“April showers bring May flowers.” While that might be the case in the lower elevations of the park, that’s not really so in the upper elevations. If you visit during mid-late July, however, you’ll see an explosion of wildflowers in the park, including the beautiful tiger lily.

As I was driving up the road from the Nisqually Entrance toward Paradise, one July a few years ago, I saw this patch of bright orange, strangely-shaped blooms. There was no place for me to stop along the narrow road, so I drove on, trying to figure out where I could park and then hike down to this patch. Luckily for me, a day later, while driving Stevens Canyon Road, I saw these flowers again, right next to a convenient pullout.The tiger lily plant, also known as the Columbia lily, can grow to a little under 4 feet in height, with a few or numerous orange blooms dotted with brownish spots. They are apparently lightly-scented, which I did not know, otherwise I would have bent down to sniff (and probably breathed in pollen and then gotten an allergy, so probably just as well I didn’t know this). Tiger lilys are just one of the many wildflowers you’ll see during a July visit to this national park.

Comments Off on Tiger Lily

It’s time to test your knowledge with my latest quiz and trivia piece published in today’s edition of the National Parks Traveler. It’s all about spring wildflowers in the national park system. See just how much you know and maybe learn something new.

To take the quiz, click on the image above. After you’ve finished with the quiz, take a look at the other articles in today’s edition of the Traveler, while you are at it.

For this July 4th, how about a bit of flower fireworks, courtesy of these blooming spider lilies. They make me think of bursting white and yellow fireworks. A bit of a throwback to 2015, courtesy of Brazos Bend State Park in Texas.

Where ever you are folks, regardless of the day (which feels to me a bit marred thanks to tRump’s little Covid party last night at Mount Rushmore National Memorial), please stay safe out there. The coronavirus is here to stay until there is a viable vaccine available to everybody, so please practice social distancing and wear a mask. It aint a hoax.

Comments Off on Flower Fireworks

My final installment (Part 4) of the Armchair Photography Guide to Mount Rainier National Park has been published in today’s edition of the National Parks Traveler.  Click on the photo to be taken to the site if you want to check out the article (and read Parts 1 – 3, if you haven’t already done so). 😉

Focus on More than Just the Mountain

The National Parks Traveler published my latest photography article.  This month’s article deals with focusing on more than just “The Mountain” in Mount Rainier National Park.  Click on the photo above to be taken to the article.

One of the reasons I traveled so far to visit Big Bend National Park, Texas, in late April, was to view and photograph the blooming cacti.  I don’t know what it is about being so excited to see these lovely flowers as opposed to any other spring wildflower.  Perhaps it’s because I am always so amazed to see something so prickly and painful produce something so colorful and delicate. 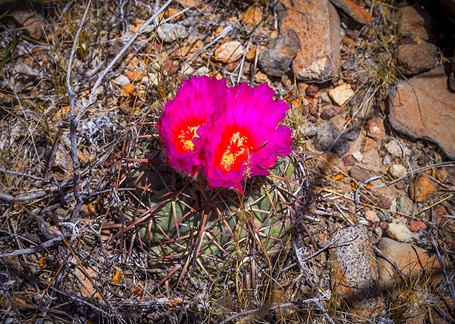 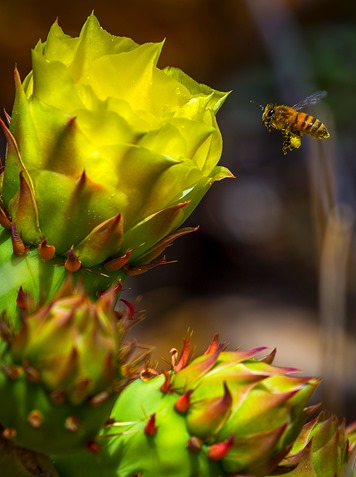 Bird’s Nest in a Blooming Cholla

I used several different methods for achieving these blooming cacti shots – all without the use of a dedicated macro lens: 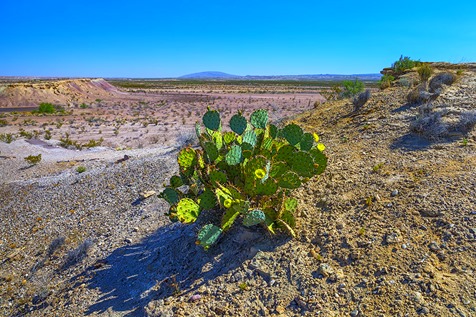 It’s been maybe 4-5 years since I traveled into the hill country in search of those quintessential blue harbingers of a Texas spring.

One day, last week, a co-worker emailed to tell me she had driven to Chappell Hill and then on to Washington-on-the-Brazos to view the wildflowers.  She said the color display was amazing. 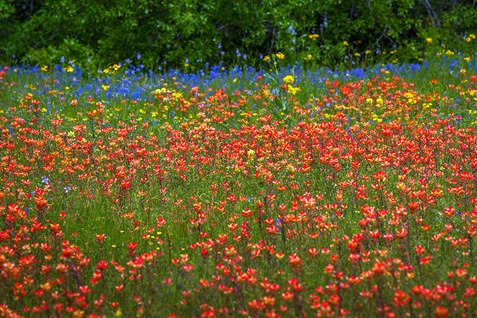 So on my next Friday off, I took my cameras and myself on a little drive along Hwy 290 to Chappell Hill to see the color for myself. 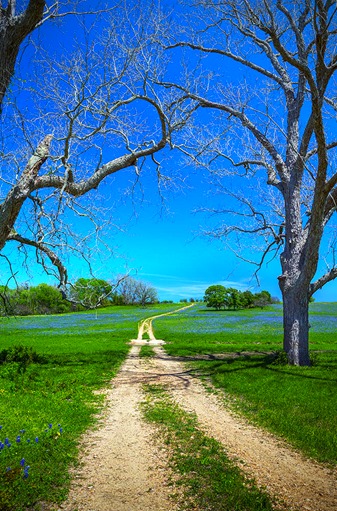 Comments Off on Spring Means Bluebonnets

Becky in a Field of Gold

Yesterday, I drove out toward Texas hill country to capture some images of the bluebonnets, Indian paintbrush, and other wildflowers – like this field of gold wildflowers (whose name I need to look up).  It was a beautiful day and I managed to get some great shots, more of which will be in a future post. 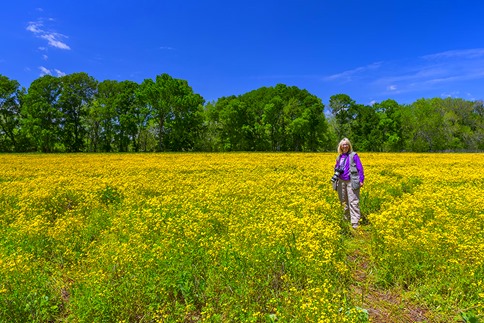 If you are currently in the southeast/central part of Texas, drive Hwy 290 over to Chappell Hill and then take 1155 from there toward Washington-on-the-Brazos state park to see some lovely carpets of blue, red, and yellow covering the fields as well as much smaller spots of scenery.

Comments Off on Becky in a Field of Gold

Although I have a full plate of things to do around the home during the 2012 three-day Memorial Day weekend, I still tend to get a little stir crazy if I can’t go out and photograph something during my time off.

While I may bitch about living in southeast Texas (being a gal from the mountains, I’ll always be doing that), I readily admit that it’s rather nice to have two very interesting photographic ops right at my back door:  Brazos Bend State Park, and the Brazoria National Wildlife Refuge.

Right after visiting with my mother on Saturday morning, I grabbed my cameras, loaded them, tripod, and myself into the car, and drove the 20 miles south-southeast to check out the Brazoria National Wildlife Refuge. 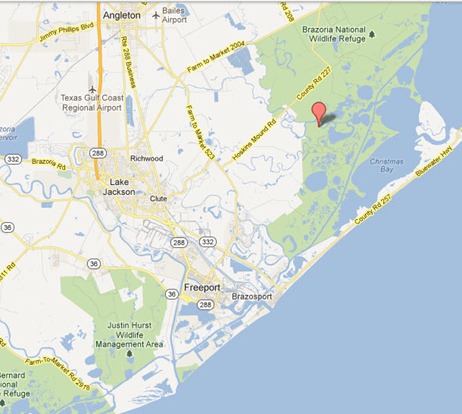 For the photos you see here, I used my Canon 5D Mark II cameras and my 16-35mm and 70-200mm lenses.  I carried everything in my new Lowepro Fastpack 350, which, btw, is AWESOME!  I am going to Mesa Verde NP and Arches NP later this year, and wanted something that would carry a camera and long lens, as well as water, snacks, etc.  Ok, sorry, I went off on a tangent.  The 16-35 lens was attached to the tripod for landscape shots, and I hand held the 70-200 lens (with IS turned “on”) for the wildlife and more close-in images. I find I hand hold this lens more often as not, eschewing the tripod ring.  I was pleasantly surprised upon post processing that I really only had to do a very little editing for light/brightness and a teeny bit for sharpness details on some (but not all) of the photos.  The light was just right that day – very sunny but with some interesting clouds.  So I kept the ISO at 200 and the aperture around 7.1.  Oh, and I gotta tell ya, a long lens is a must-have for this area.  Unlike Brazos Bend State Park, there are not many places to comfortably get up close and personal to the birdlife, and there is slim-to-no parking alongside the one-lane gravel road past the refuge center.   My 70-200mm was ok, but what I really needed was a lens 400mm or more.  But….one makes do with what one has.

Next to the refuge center is a boardwalk across Big Slough (pronounced “slew”), leading to  a plowed path called Big Slough Trail.  I didn’t go very far down the path because:

1)  The mosquitoes were horrible (they must have been as large as egrets!) and I forgot to wear bug repellent (I was in too much of a hurry to leave the apartment and that is one of the things I forgot, although I did remember to apply sunscreen and grab a hat).

2) As  far as I can tell from my walk and the map, this trail doesn’t  lead down to the water’s edge, which is where you really want to be to get those bird shots.

So I did some landscape and flower photography along the boardwalk before heading out along the gravel-road auto tour.

Note:  the Texas wildflower book I own is total crap and didn’t list half of the flowers I photographed.  I ran some searches online and couldn’t come up with much either, so many of these flowers won’t have captions to them.  If you think you know what the un-captioned flowers are, do let me know.

Unknown yellow flower.  There were a number of “look-alikes” in my useless wildflower book, but none of them really fit this image.  So I don’t know what these flowers are called. 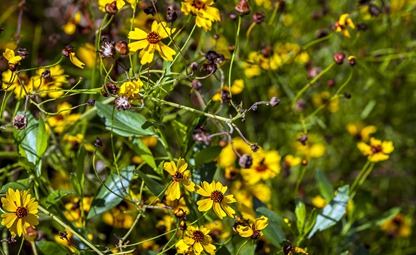 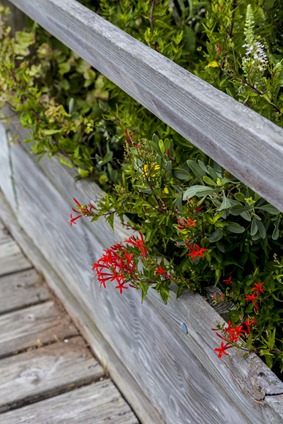 Basketflower (at least my wildflower book has something). 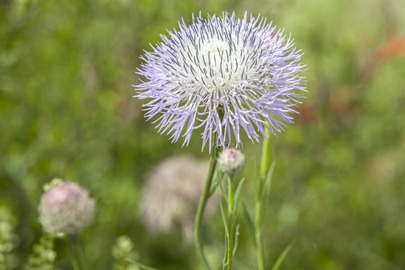 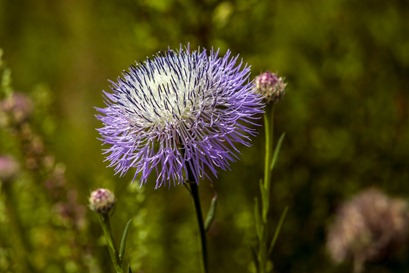 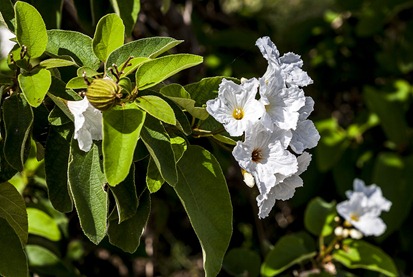 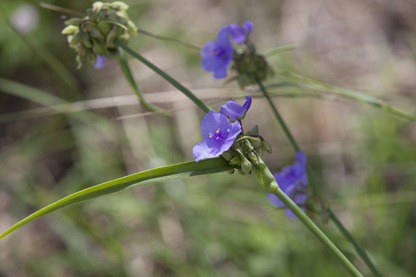 Big Slough views from the boardwalk. 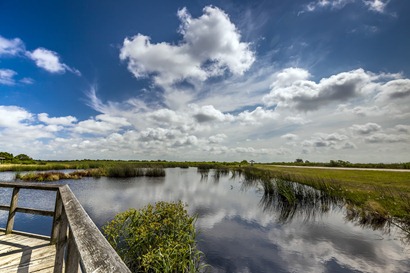 Nope, I didn’t see any American alligators.  It was hot already and I’m pretty sure they wanted to stay in the water to remain cool, rather than sun themselves in the growing heat.

After my visit to the refuge center boardwalk area, I climbed back into the car (followed by hoards of mosquitoes) and started along the gravel road auto tour.  It’s basically one-way, although they don’t have arrows – instead they have signs with numbered stops (which means there is probably a tour guide within the center  that I should have gone in get).  It’s practically impossible for one car to pull over to allow a car from the opposite way to pass you….as I can attest…. 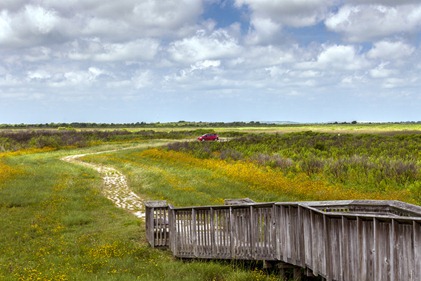 Texas coastal marshland and wetlands as far as the eye can see. 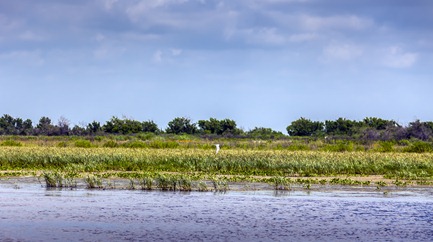 Ibis in the water.

Red-wing blackbird.  You can’t  see its red markings in these photos but I did when it spread its wings out. 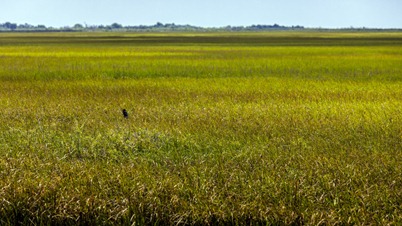 If any of you are interested, I just published to my Blurb Bookstore a 150-page journal titled Texas Coastal Images.  Half of the journal is filled with totally awesome photos taken in such places as Brazos Bend State Park, Port Aransas, Padre Island, and the Brazoria National Wildlife Refuge and the other half is nothing but blank lined pages for writing/artwork.  It would make a great gift for yourself or someone who is a fan of coastal Texas landscapes, flowers, and wildlife (mainly birdlife).  Click on the book link on the left side of this blog and it will take you directly to that particular book in my bookstore.  You can preview the pages of this journal and see for yourself the Masterpiece that I have created.

Hey, it’s all about marketing!

Where The Trails Take You Photography
Blog at WordPress.com.
Loading Comments...