“The most important thing we humans can do is to respect all life. The Hopi believe that to not do this is something akin to a mental illness”.

I think things happen for a reason, no matter how incomprehensible they may be at first glance. I think I was steered away from the Square Tower House tour toward the Mug House tour so I could hear the words of the Adopted Daughter of the Bear Clan and experience the kindness of the people around me.

Mesa Verde National Park, Colorado, offers ranger-led, backcountry hikes to Square Tower House and Mug House during certain times of the year, with a limited number of reservations. I really wanted to reserve a spot for the Square Tower House hike because I think it’s a beautiful dwelling (as seen from the overlook), but the tour was offered aftermy stay in Colorado ended. So, I opted for the Mug House tour instead, having not a clue as to that particular cliff dwelling since there is no view area to these ruins.

The Mug House tour begins at the Wetherill Mesa ranger kiosk and lasts from 10AM to about noon for a 3-mile roundtrip hike on a “goat trail” over uneven terrain with some scrambles up and down rocks and boulders.

Our guide was Ranger Denice, an adopted daughter of the Hopi Bear Clan (which I thought was totally cool). Her (and her adopted families’) perspective on this hike offered thoughtful views that I actually remember (as opposed to other things which tended to go in one ear, swish around gray matter in my skull, and then exit by way of the other ear).

Along the route, Ranger Denice pointed out various plants that the Ancestral Puebloans would have used for food, building materials, medicine, basketwork, and ceremonies.

She also stopped and pointed in the distance to the cliff dwelling Lancaster House, which survived a fire that had swept across the Wetherill Mesa area during the not-so-distant past.

As you readers know by now, if you’ve been following my blogs, I’m not a huge people person; I prefer being as far away from crowds as I possibly can. I have discovered, though, when I am away from work and back out in the West (which doesn’t happen often enough for me), I am relaxed, happy, and more open to people. With that in mind, I write that the people who were on the Mug House Tour with me were friendly and so very helpful when it came to making sure a backpack-laden, slightly overweight, definitely out-of-shape (but eager and energetic) middle-aged lady didn’t fall and hurt herself during those scrambles up and down the boulders (I’m not the most sure-footed of creatures) and I definitely learned a lesson: my subsequent day hikes consisted of NO backpack – whatever I needed (snacks, water, memory cards, spare batteries) was stuffed into the pockets of my Domke photographer’s vest. 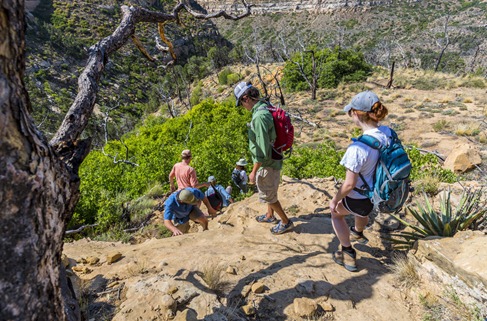 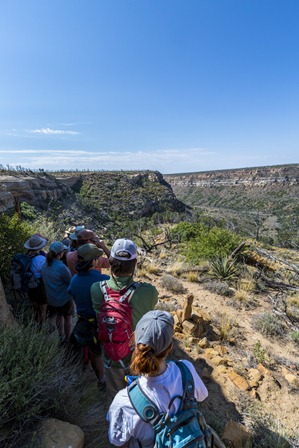 Our backcountry hike was a “three fer one”: in addition to visiting the main attraction, we also visited two other interesting little sites. 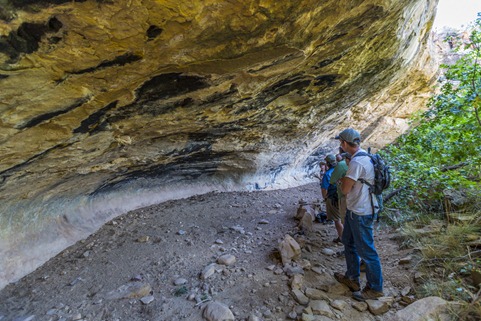 The next small site visited remains essentially unrestored. They know a kiva is beneath the soil, and portions of some rooms have been excavated. For the most part, this site is left as is. 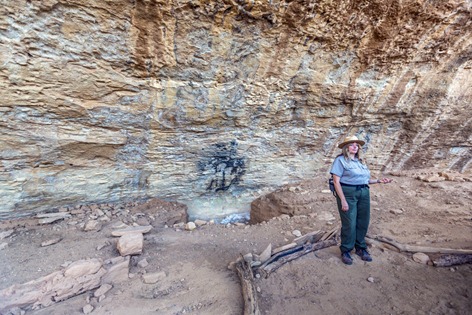 Mug House, itself, is a quiet place with a beautiful view (actually, all cliff dwellings have magnificent views). One feels the spirits of the past dwellers swirling around them. It’s also the place where three beautifully-decorated pottery mugs were discovered, tied together at the handles. Hence the cliff dwelling name. 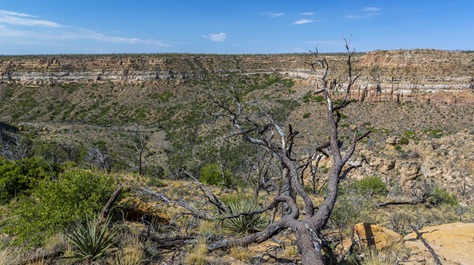 Valley view from the cliff dwelling 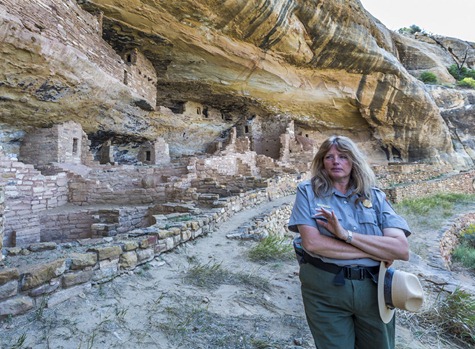 Adopted Daughter of The Bear Clan

Part of the cliff dwelling

If you visit the park and have the opportunity to take this tour, by all means do so.  And hopefully you will be led to this silent place by the Adopted Daughter of the Bear Clan. 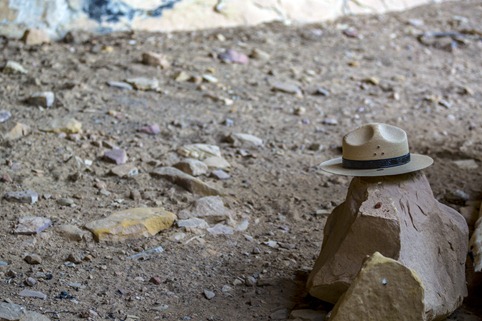 I’ve made all my reservations and my plane ticket is purchased. I fell in love with this park when I visited for a day in 2011, so during the last week of August, I’ll be spending several days within the park again, hiking, taking guided tours, and staying in the park’s lodge. Then, I’ll make a trip up to Arches National Park next to Moab UT for a few days.

You may wonder at the new look of the photos in my galleries. A post about all of this will be following shortly.