Revisiting A Favorite Spot In A National Park

I know I’ve written this before, and I tend to hammer it in to the readers of my photo column on the National Parks Traveler. But, I’m not going to stop hammering it in, so here we go again: it’s always a great idea to revisit and rephotograph a favorite national park spot, because – depending upon the season, time of day, and weather – things can look quite different from the last time you visited. If you are using a newer/different camera, the level of detail can look quite different, as well.

Take these shots of Myrtle Falls in the Paradise area of Mount Rainier National Park (Washington state). Each of the three photos were actually captured in September, from late summer to autumn, and during the morning (I didn’t realize they were all captured in September until I looked at the file info). However, these images were photographed in different years (2016, 2020, 2021) and under different weather conditions. Makes quite a difference, doesn’t it?

The first image shows a sort of veiled mountain view that I photographed with my Sony a7riv. Smoke from a wildfire had wafted in that morning, when the previous morning was crystal clear. The second image is the most recent, captured the day after official autumn and conditions were perfect for a clear photo of everything and was photographed with my Fujifilm GFX100. The last photo was taken during a rainy day when The Mountain was completely hidden from view by fog/mist/low-hanging clouds, so I focused on the waterfall rather than the gray background with my Canon 5DSR. And the really nice thing is that during each of those photo sessions, I had the place all to myself (I may forget what I ate for breakfast the other day, but stuff like that, I tend to remember). Most people up there at that time of year tend to want to sleep in, I guess.

Anyway, look at these images and compare them to one another, then take my advice and revisit your favorite spots for more photos.

Comments Off on Revisiting A Favorite Spot In A National Park

Here’s a sunrise for your Saturday, folks. Today (Sept 25, 2021) is National Public Lands Day. Fees are waived at the national parks. It’s a great day to enjoy the outdoors and think about how you can help preserve a park’s environment for future visitors. It can be as simple as packing out what you pack in and picking up trash you see along the trail. I did that yesterday. I saw an occasional candy wrapper and even a discarded mask. I’d forgotten to bring a trash bag with me, but I still had other bags I could use for picking up and carrying trash. It’s good for one’s karma, you know. 😊

It’s Trivia Tuesday, folks! So are you looking at UFOs in the images above? Nah. But, if you ever visit Mount Rainier National Park in Washington state, you might see a lens-shaped cloud hovering over “The Mountain” or the Tatoosh Range. These are called lenticular clouds and they usually form when there’s a moist airflow over a mountain (although sometimes they form where there is no mountain). They look calm and stable, however they are anything but stable. Pilots like to avoid them as they make for one heck of a turbulent ride. “Lennies” also make for great photo ops, don’t you think?

It’s Trivia Tuesday, so here’s a little bit of trivia about “The Mountain.” Mount Rainier is an “episodically active” volcano and the most-glaciated peak in the Lower 48. The indigenous people named this mountain Tahoma or Tacoma, but it’s present-day moniker was bestowed upon it by one Captain George Vancouver, after sailing into Puget Sound in 1792. He named it after his buddy Peter Rainier. Mount Rainier National Park is America’s fifth national park.

Looking at this image might cause you to think I’ve deliberately oversaturated it. Nope. I can honestly tell you that for 20+ seconds, the sunrise colors are indeed this saturated. You have to work quickly to catch the scene, because as quickly as the colors appear, they disappear and are replaced by regular sunlight which turns the snow on the peak blindingly white and risks overexposure of a photo.

See that tiny person standing at the edge of Tipsoo Lake, in the lower center-ish portion of the shot next to the tree? That gives you an idea of the majesty of the landscape: One Big Mountain, One Teeny Person.

This sunrise shot was captured one fine autumn morning, a few months after I’d moved from Texas to Washington state. It’s early summer as I post this photo, and if you were to go there now, the lake would be mostly covered still in ice and snow.

It’s Fun Fact Friday! So, here are a few facts about Denali Mountain and Denali National Park and Preserve in Alaska. Did you know that only about 30 percent of people visiting the park ever get a glimpse of the mountain? Like Mount Rainier, Denali Mountain makes its own weather and these conditions can hide the 20,310-foot tall mountain behind a wreath of clouds and fog most of the time. The first climb to the top of this tallest peak in North America was done in 1913, and a member of the climbing party – Harry Karstens – would later become Denali’s first superintendent.

There’s an interesting article in today’s edition of the National Parks Traveler about Denali Mountain. Climbing rangers out there are voicing concerns about inexperienced climbers trying to summit the mountain, and after reading the article, I see there is very good reason for them to be concerned. To read that article, click on the image above.

I visited Denali National Park and Preserve for five days several years ago, and was lucky to have been able to see Denali every single day I was there. This image is the result of one such day of clear viewing.

Here’s something interesting you might or might not have known about life in Denali National Park and Preserve, in Alaska. There are 39 species of mammals in the park, including the Big 5 (moose, caribou, Dall sheep, wolves, grizzly bears), and 139 species of birds. But, only one amphibian has managed to adapt to life under the harsh conditions of the park’s landscape. The wood frog can actually freeze itself solid during the winter! It’s heart stops, it doesn’t breathe, but there are cryptoprotectant chemicles that keep the frog’s cells alive, and when spring arrives, the frog thaws out and starts searching for a pond and a mate. Pretty cool, huh? (pun intended).

As for this image, it was captured during my 5-day stay at Camp Denali, located near the end of the one and only road through the park. There’s a little pond right outside of the main camp building called Nugget Pond, and on this particular day, I captured three different shots of it as the morning lightened up. The first shot you can see if you look at a previous post. This is the second shot, captured a little later during sunrise, and I’ll post the final shot later on.

I cannot drive past Tipsoo Lake in Mount Rainier National Park without stopping. No matter what. And, in the morning, it can be difficult to photograph, unless you are right there for those all-too-short moments of sunrise. After sunrise, the colors on the mountain vanish and the snow on the mountain becomes blown out. Sunsets are better times to photograph this place, but I’m never around during that time and during the summer, sunset occurs quite late at night, when I have usually driven back home. Someday, I’ll stay to capture the sunset, as I’ve seen beautiful images captured during that time.

Snow still lingers around Tipsoo Lake, and I was glad I took along my snowshoes when I visited the park a week ago. I got my morning exercise snowshoeing around the lake.

Comments Off on Sunrise And Lingering Snow 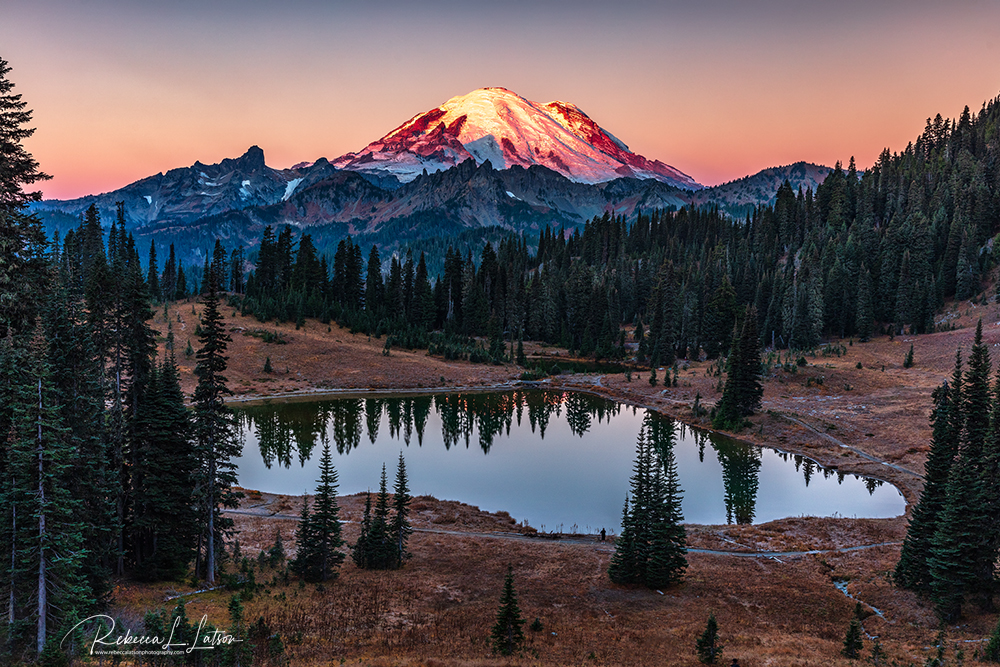 Ok, I don’t really know what alliterative thing it is for Monday, but since it’s the start of the work week for most of us, it probably feels like you are climbing a steep mountain to even get out of bed this morning, right?

So, how about a little bit of colorful sunrise to go on that mountain top?

Comments Off on Mountain Monday

The Mountain in the morning, Mount Rainier National Park, WA

Sunrise colors are fleeting, so I was happy to have made it to Tipsoo Lake, in Mount Rainier National Park, just in time to set up camera and tripod to capture several shots of those gorgeous, saturated colors, before they disappeared.

I’m all done with my national park portion of my road trip move from Texas to Washington State.  I’ve visited 5 national parks on this trip and have come away with some stunning photos (imo).  I’m in Bozeman, Montana, visiting friends and will leave tomorrow to continue on to central Washington.  It’s been an awesome trip, so far, but I’m ready to see the end of the road (literally).

Here is an image I captured one early morning at Schwabacher Landing in Grand Teton National Park.  No visit is complete without a stop in this area.  Be warned, though.  Except for a very short portion of paved road, the rest of the route is a gravelly, bumpy, potholey drive to the parking area.  And it’s best to arrive in the morning, not only for lovely lighting but to beat the crowds (if you visit in the summer).  Do walk along the trail as far as you can, because there are many views with still water and mountain reflections all along the way.

Where The Trails Take You Photography
Blog at WordPress.com.
Loading Comments...