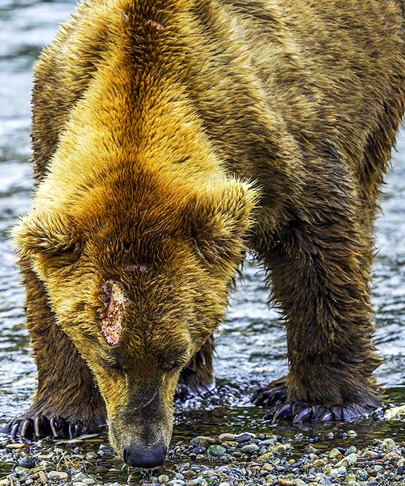 While photographing the brown bears in Katmai National Park, almost every bear I saw (not all, but almost) sported some sort of wound in varying stages of the healing process on the face, across the snout, on the neck, back, or butt.  Some of the wounds were quite new, while others were healed or almost so.

The thing about bear wounds is that these bruins have incredible healing powers.  And, oftentimes, the fur may or may not grow back;  if it does grow to cover the wound, it’s not as thick.  Therefore, scars can be a key characteristic for park biologists in identifying a particular bear. 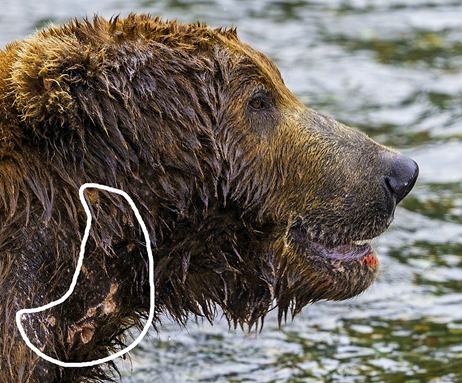 Yes, those are puncture wounds made from the teeth of another bear.

Some bears get their injuries through a fall (as in falling from the top of Brooks Falls or falling down a mountainside), while other (probably the majority) get their wounds via altercations with other bears battling for mates, prime fishing ground, or some other territorial or food dispute.

I learned that – as a rule – bears prefer not to get into  a serious fight.  Instead, their disputes generally consist of much posturing, loud roaring (which can be heard a mile away – I can attest to that), and a display of teeth.  Sometimes, though, as the pictures above indicate, things can get pretty serious.

The arguments above looked serious, with the bears trying to bite each other.  However, their fights were over as quickly as they began, and of the disputes I witnessed, none ever drew blood.