Photography In The National Parks: All About The Bears 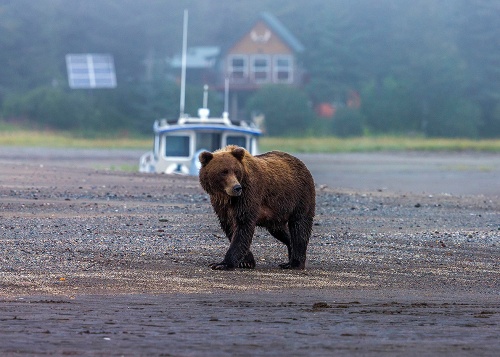 The National Parks Traveler has just published my latest article to their site.  Click on the photo to be taken there.  And while you are at it, check out my previous article as well.

Comments Off on Photography In The National Parks: All About The Bears 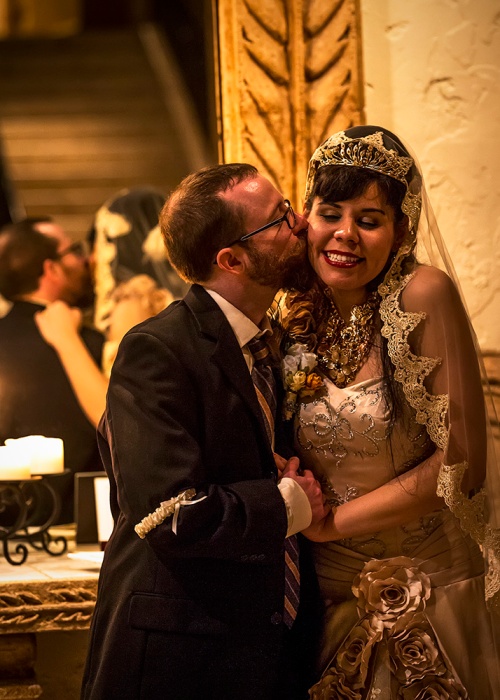 I met Jennifer several years ago, during our Texas Renaissance Festival days; I have a couple of fun photos of her elaborately costumed as a zombie wench during the Halloween-themed weekend.  I also remember her telling me once she didn’t like jam because she used to work in a jam factory.  Jennifer is from the UK so she has that wonderful British accent.  Oh, and she’s the horror hostess of the Edwina Rigormuerte Houston Horror Chamber Review (being a photographer has allowed me to meet all sorts of interesting, cool people).

I was so pleased when Jennifer asked me to photograph her and John’s (she calls him by his middle name, Avery) wedding.  I knew this was going to be an interesting wedding, given the couple’s love of old horror movies and her own very unique fashion style.  What made it even more special is that, in addition to being hired as their official photographer, I was also a guest!  That meant I could have a slice of wedding cake (it’s a thing with me – I always try to get a piece of cake); for once, I could photograph the cake and eat it too!

Ever heard of the Las Velas?  It’s a hidden gem in Houston located between Hwys 59 and 610.   It’s not obvious from the road, and I saw no large sign pointing the way to this venue.  I asked Jennifer how she found it and she laughed, saying she was searching online for “inexpensive wedding venues”.  The Las Velas’ exterior is filled with lots of flowers and greenery, fountains, and mosaic-inlaid stone.  The interior hosts large, airy spaces, lots of natural lighting, elaborate molding and polished stone floors inlaid with mosaic butterflies and curly-cues. 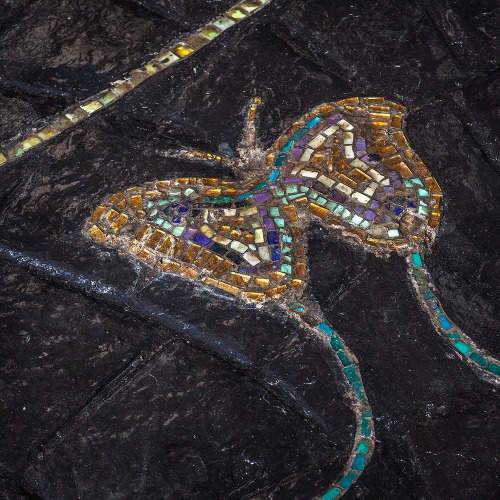 As I wrote in a previous post, every wedding is different.  This particular event was quite laid back and kinda funky (the bridesmaids wore combat boots with their dresses). 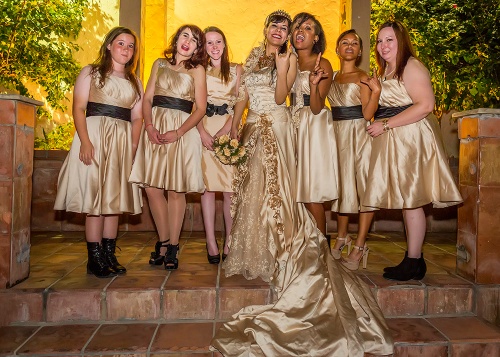 Both ceremony and reception were interior events (with the exception of a few posed outdoor photos), so I made use not only of the natural light coming through the large windows, but my flash as well.  As with the previous wedding about which I wrote, I used the same three cameras (Canon 1DX, Canon 5D Mk III, and a rented Canon 6D) and the same Canon L-lenses (85mm f1.2, 70-200 f2.8, 24-70 f2.8, and 16-35 f2.8).  I photographed the same scenes with all three cameras, with and without flash.  For exterior shots, I used ISOs of 200-400 and interior shots had ISOs of 1600-2500 even with the flash.  As with the photos from the wedding of the previous post, I used Imagenomic’s Noiseware to reduce the high ISO grain as well as Imagenomic’s Portraiture and OnOne’s Perfect Effects for certain photos. 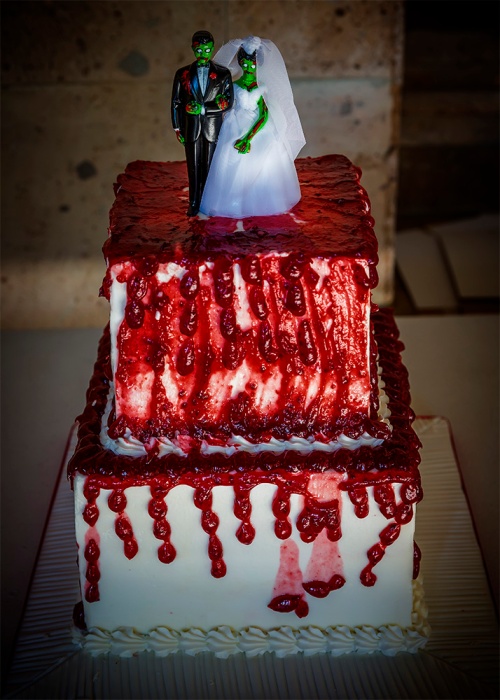 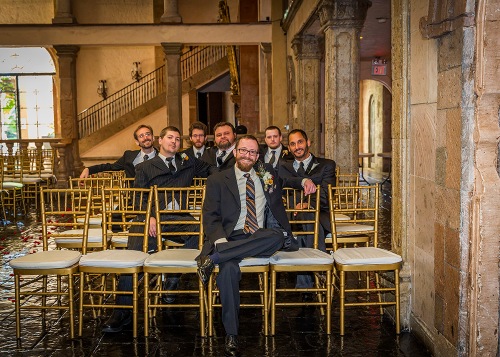 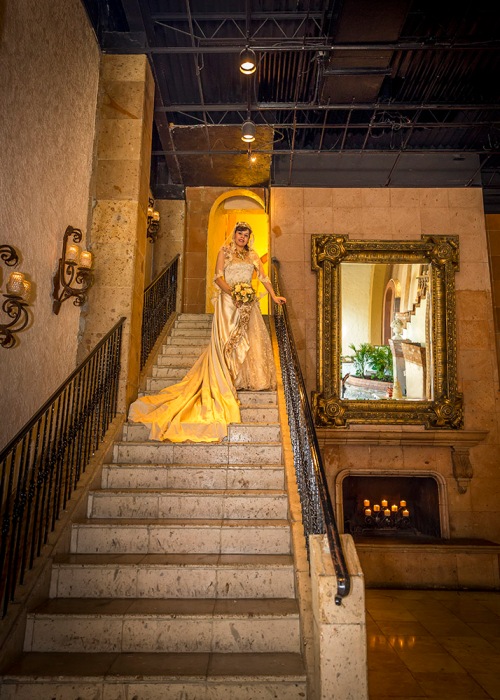 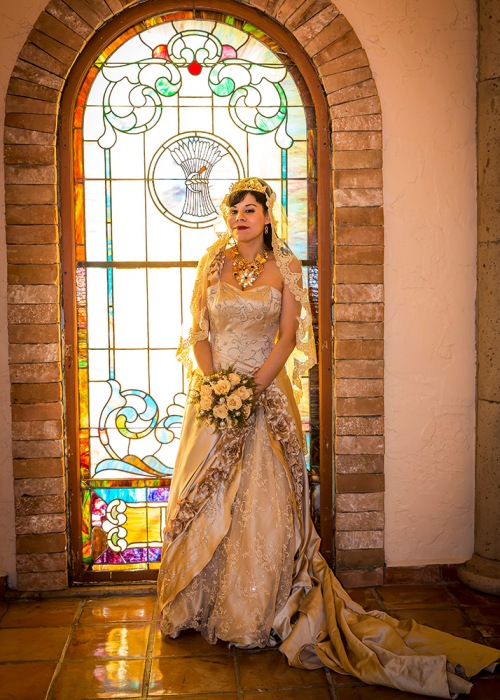 The end of Jennifer and John’s wedding signaled the end of my wedding photo shoots for 2014.  We’ll see what transpires in 2015.

To see more images from Jennifer and John’s wedding, click on this link to go to that gallery.

Comments Off on Photographing Jennifer and John’s Big Day 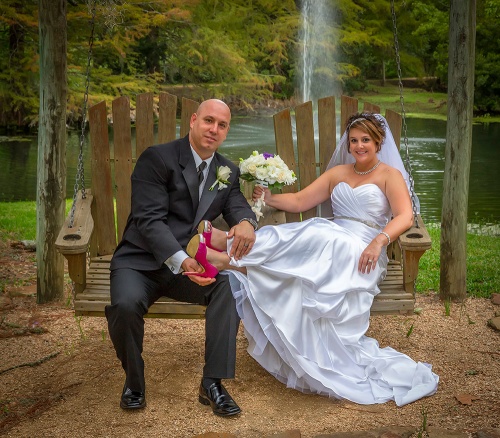 Gads!  I know!  It’s been forever since I last posted to this site.  So sorry!  I’ve had two weddings, a trip to Hawaii, and two airshows that I’ve photographed since my last post.  Oh yeah, and a day job in addition to all of this photography stuff.  I’d come home from work, eat a little dinner, try to watch the national news, then sit down to process anywhere from 4 – 10 images each weeknight before going to bed around 10PM and then getting up at 4AM to start my day over again.  Sometimes, I’d even take my small travel laptop to work with me so that I could sit at my desk and edit photos during my lunch time.  Weekends after each event have been spent at home, making the big push to get as many photos processed as possible, from the time I wake up around 5AM to the time I go to bed around 10-11PM.  My home is a pig sty because I haven’t had time to pick anything up and clean, and I still have luggage opened up with stuff strewn about on my floor because I haven’t had time to really unpack.

But now, I’m done!   And to prove it, I am posting here the results of the wedding I photographed September 27th, for Kevin and Amber.

Some of you have asked what my wedding workflow entails.  One of the tasks I try to do for each wedding is to Google the wedding venue and then personally drive (if in-state) to the venue to scope it out for photo ops as well as just the general lay of the land.  I also introduce myself to the venue staff so they know who I am, why I am there, and what I look like in order that they recognize me on the wedding day.

Kevin and Amber’s wedding was held at the Northwest Forest Conference Center, Cypress, Texas.  The conference center is a large area of acreage with several venues as well as hotel rooms on site.  The venue Kevin and Amber chose was The Alamo (a replica thereof, where the ceremony was conducted outside the building and the reception held inside).  You’d need to have met the couple but this venue was absolutely perfect for them.  Soooo very Texan. 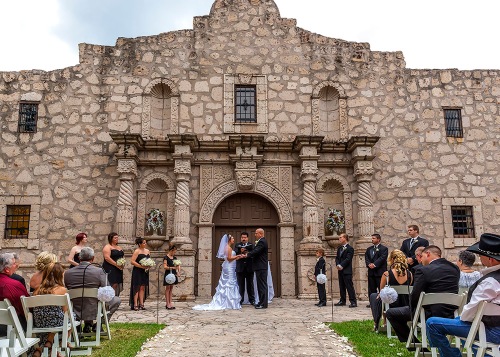 Every wedding is different.  While there are certain shots that are de rigueur (ceremony, bride and groom kissing, posed shots, cake cutting, etc.), each wedding also opens itself up to numerous photo ops singular to that couple’s day and event.

Amber was the first bride ever who told me up front that it was all about the photos.  She acknowledged that the ceremony would be over in minutes, but the pictures would last a lifetime.  With that mindset, she had a number of images she definitely wanted me to capture, and she even had examples for me to use as go-by.

While the venue differed (of course) from the example images Amber showed to me, the idea regarding what she wanted remained unchanged.  Plus, I now have these ideas in my photo op repertoire for future nuptials. 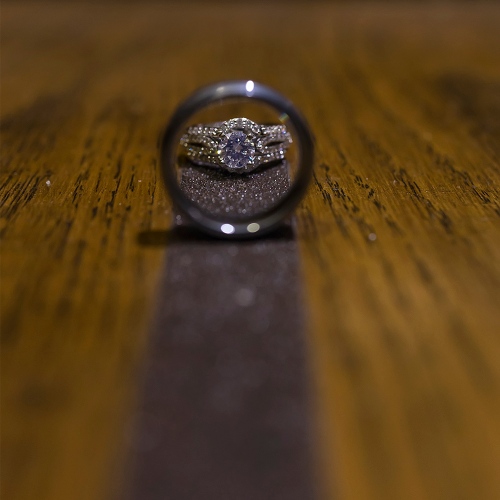 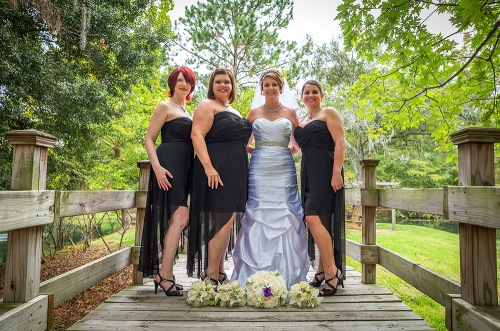 I’ve never much cared for using a flash, but that dislike has lessened as my experience wielding it improves.  That, plus a flash is an absolute MUST for reception / indoor images because of the low light.  No way around that. 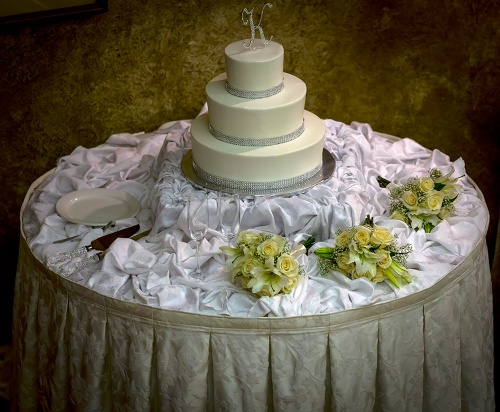 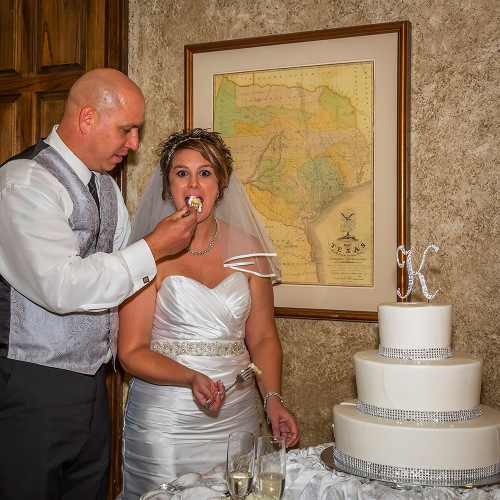 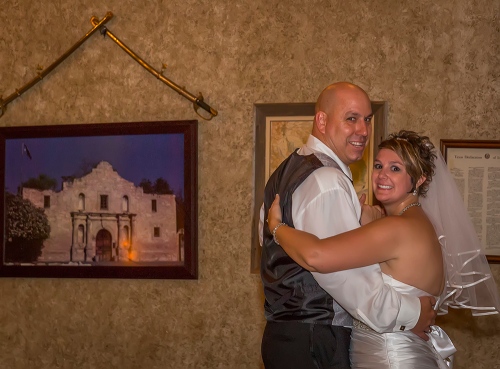 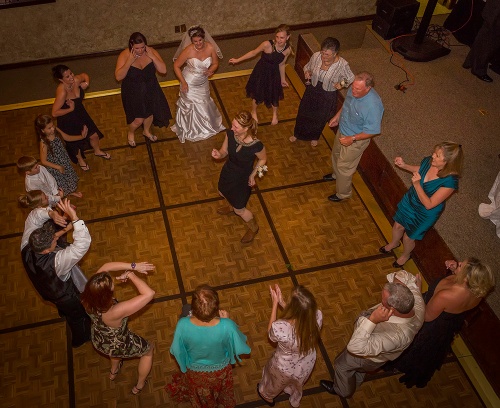 Everything was hand-held and with the exception of the 70-200mm lens, none of the others had image stabilization (IS, VR, whatever your camera brand calls it).  This meant I used the “spray and pray” method (holding down on that shutter button and letting the camera click away).  With this particular wedding, time was really tight and a tripod setup would have taken too long.  I was constantly on the move, changing between cameras.  Actually, I used each camera for the same scene just so there would be at least 1 good image between the 3 cameras – sometimes there were 2-3 good images of the same scene, so I processed them all because I like the newlyweds to have a choice – especially since each camera sported a different lens.

I made certain I whitened and brightened the smiles and I used Imagenomic’s Portraiture plug-in for Photoshop to smooth out skin creases and blemishes.  I also utilized OnOne’s Perfect Effects to add a little variation to the standard color images.  Some poses just begged for sepia or other interesting effect. 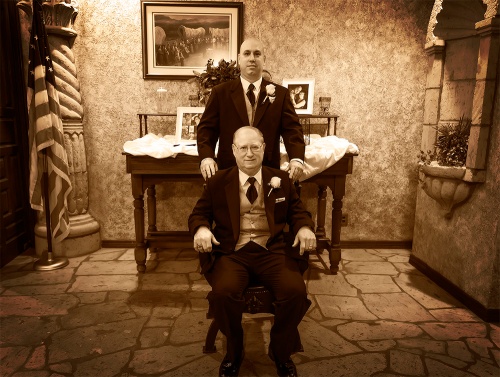 While I am always a little tired after spending 3-5 weeks on wedding photos (I cull through thousands to get anywhere between 150 to almost 400 really good shots, depending upon the length of time I am photographing), I also feel a huge sense of satisfaction with my work; that satisfaction grows in proportion to how pleased the newlyweds are with the images.  I must ALWAYS keep in mind the desires and expectations of the clients, so I am always a little nervous as to how they receive my work.

To see more images taken during Kevin and Amber’s wedding, click on this link to be taken to my photo website.  And feel free to browse around the other galleries and folders as well.  My site continues to be a work in progress.

Comments Off on Photographing Kevin and Amber’s Big Day