A Wedding In Galveston–Thoughts And Hindsight

No matter how much you *think* you know about photographing a wedding, there is always something new to learn and take back for use at a future wedding. Since hindsight is 20-20, here are a few lessons I learned and things I will (try to) do for future jobs.

Finally, here’s some advice for those of you embarking on a part- or full-time career in wedding photography. If you have a contract (and you should), make sure there is a clause stipulating that the bride & groom agree YOU are the only photographer who will take the official images of the ceremony as well as all the posed shots of  the bridal party and their families (I’ve got that clause in my contract).   Hard to avoid smartphones during the processional, but YOU should be the only one standing in the aisle with your camera catching the bridal processional.

Thankfully, I had no real issues about that with this wedding.  So, why am I even mentioning this? Awhile back, I read a  blog post about a professional wedding photographer who had a number of  key shots ruined because the guests were either elbowing the highly-paid photographer out of the way to get their own smartphone shots, or guests were getting *in* the way of a key shot, or because a guest’s flash went off at the same time the photographer’s flash went off, thus totally over-exposing (blowing out) the bride & groom or their families to the point that there was no way to recover any detail at all in the photo. I looked at each of this photographer’s photos and literally cringed over the shots ruined by rude people, both guests and non-guests.  One of my Facebook friends who is a successful wedding photographer told me he simply refuses to take any posed photos as long as some of the guests are trying to take the same shots with their own cameras. He just puts down his camera and waits. 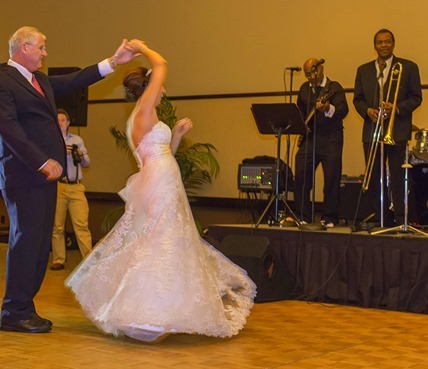 While I’ve been extremely lucky with the weddings I have photographed, that blog post and those Facebook comments highlight this problem that all wedding photographers face at some point in time.  Because of the bride & groom for this wedding prepared a very handy schedule of events for the key players, I had no problems at all during the ceremony or with the posed shots, and very minimal issues at the reception (like this photographer photo bomb during the father-daughter dance).

Naturally everybody is going to pull out their smartphone or point & shoot to  capture images during the reception, which tends to be a much less-structured event than the ceremony and far more relaxed.   Sometimes, one even runs across those guests who have toted along their  fully-loaded SLRs to the wedding because they either think they are doing *everybody* a favor (including the wedding photographer), or else they don’t think the paid photographer can do his/her job as well as they might have.  My ego would like to think that these guys (yeah, it’s usually guys)  see the wedding photos and then realize (but would *never* admit) that I did a pretty damned good job after all!

Here’s my rule of thumb:  If I am invited to a wedding and I am not the wedding photographer, then I leave my camera gear at home.  Period.

I am exceptionally proud of the images I captured for this couple on their special day.    If you would like to see more photos from this wedding, then wander on over to my Facebook page Rebecca Latson Photography, click on the Photos box on my timeline, select Albums, then click on the link to the Maegan and Josh album. And, if you like what you see, then please “Like” me while you are on my page.

One response to “A Wedding In Galveston–Thoughts And Hindsight”