Working On That Flash Photography Thing

Once upon a time, I used to think of myself as only a landscape photographer.  Then, one day, I offered to photograph my nephew’s wedding as a wedding gift to them from me.  One thing led to another and I have now photographed several weddings, a wedding reception, a model portfolio, a bellydance portfolio, a couple of different dance troupes, my oil & gas company’s Dilley TX field office party and several years’ worth of King’s Feasthall / King’s Winetasting / Texas Renaissance images.   This all being done in addition to my regular , non-photographic day job.

For the majority of my images, I prefer using natural light as opposed to flash; I would increase the ISO and utilize noise reduction software during the post processing.  Oh, I  did use flash for a number of photos, but not many of them, since I have not been that enamored with flash photography.  Why?  Well partly because I don’t like the harsh shadows, partly because I know it bugs some people to have a bright light flashing in their face a lot, and partly because I am not very experienced with flash photography.

I am, however, totally enamored with light quality, quantity, and control of these two elements.

Because I currently have at least one, possibly two future weddings to photograph in 2013, along with an unknown number of portrait sessions, I finally bit the bullet and purchased Canon’s Speedlite 600EX-RT along with the Canon Speedlite ST-E3-RT  wireless flash transmitter and a couple of studio lighting props.   Practice makes perfect, so  I executed a number of  test shots of me (since I was the handiest human subject) that I’d like to share with you all.

Note:  the majority of the images in this post only have sharpening and portraiture applied to my pretty little face via the post process, as well as removal of glare spots on my glasses.  The lighting is as it was out of the camera.  If I made any changes (say, lightening up some of the shaded spots on my face), I made mention of that.

Also, for some reason, the photos inserted into this post have a bit of a murky, green or off-color tinge to them.  If you click on each photo, it will take you to this photo on my website, where the color is true.

I already owned a Lastolite Ezybox 24×24 softbox and stand, but haven’t been that thrilled with the results during the times I used it (again, remember I don’t have much flash photo experience under my belt). So, I decided to order a couple of other lighting accessories:  the Gary Fong Lightsphere and some sort of umbrella  lighting setup.

Sure, I know that I could have probably created a DIY lightsphere using a plastic milk bottle at a fraction of the cost of the Gary Fong version, but I didn’t feel like taking the time and effort and the lightsphere really is a pretty nifty item that fits quite well on my flash unit.

Here’s the image with the flash straight out of the box.   I was pleased to see no harsh shadow.  The light was a little bit  harsh, though and  I was not so pleased with the resultant white balance.  Did it occur to me to set the camera’s white balance on something other than AWB?  Hell no!  It didn’t occur to me until after I’d run through a number of test shots.

Here’s an image using the Gary Fong Lightsphere.   Remember, not much experience with flash, have I (I say in my best Yoda voice), so to get a result like this made me pleased and proud, indeed.

The following day, I started working with my new umbrella and stand.  I ordered the Westcott 7’ parabolic white umbrella with 8’ stand. Um…ok…when I received the umbrella and unfurled it for attachment to the stand, it was *then* that I realized just how wide 7’ is.   I couldn’t raise the stand up too high or else the umbrella hit against the ceiling.  My spare bedroom is not a studio and the ceiling isn’t that high. 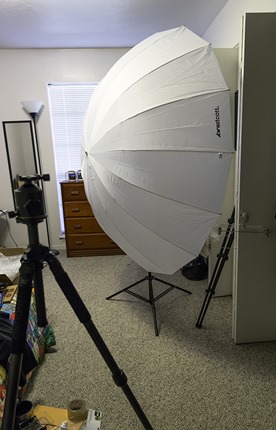 Ah well, size  issues aside, I went ahead with my tests.  The tripod, camera, umbrella and flash were on one side of the bed while I stood on the other side against the wall with the shutter release cable in my hand.

My flash was set up ETTL Manual and I was using my Canon 5D Mk III with a Canon 24-70mmL II lens.  The flash frequency was set at 1HZ  and the output was initially at 1/128.

My reaction to a flash output of 1/128:  bleah.  Plus, that damned white balance looked horrible.  Not understanding flash output at all, I set it to 1/4 and my result is the very first image you see on this blog post, right beneath the title……a bit too bright.  But, at least I’d fixed the white balance by setting it on Tungsten. 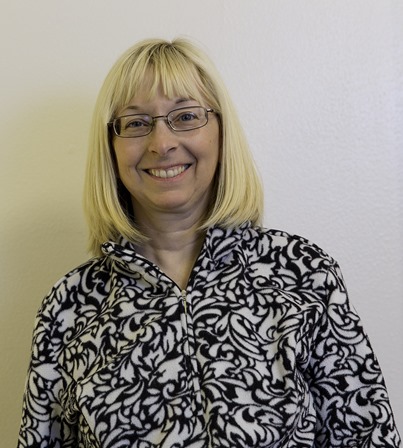 Now, in addition to the flash setup, I also had an overhead room light, two tall floor lamps (one on each side of the room), and a nightstand lamp to my left (that would be camera right). 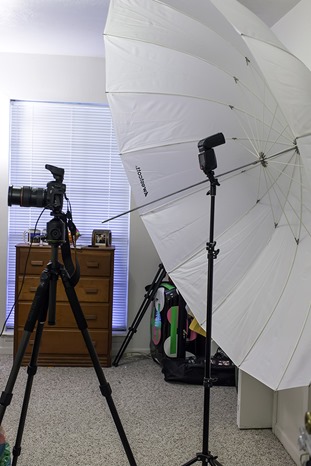 Originally, I wanted the flash higher above the camera.  Unfortunately, the umbrella’s size precluded that little experiment (I’ve subsequently ordered a 32” umbrella).  That seven-footer kept scraping against the ceiling the higher I raised the light stand.  In the end, I kept the umbrella behind and to the right of the camera, just a little bit above the tripod setup.  I also decided to experiment with turning the various other lights off and on.

This shot was taken with just the flash bounced off of the umbrella, and the single nightstand lamp.  Sort of film noir-ish….or sort of sinister, depending upon your outlook.

This photo was taken with the flash, the nightstand lamp, and the floor lamp next to the window to the camera’s right. 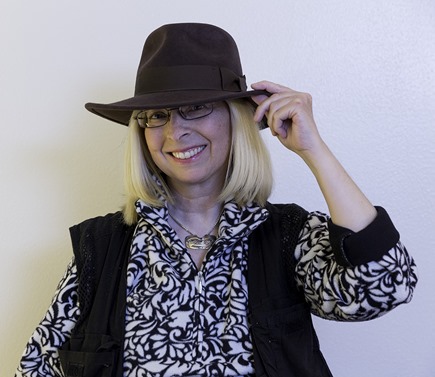 I then turned off the overhead light, but kept both floor lamps and the nightstand lamp on while using the bounced flash.

This shot was using the bounced flash and all of the lights turned on.  My left side was a little on the cool side, while the right side was much warmer.  Nothing that couldn’t be fixed in Photoshop.  I should have tried using my large gold reflector to compensate for the cooler color on my left side, but I honestly didn’t think of it at the time.

Ok, so during all of these experiments, I noticed that I literally needed to keep an eye on the glare and little reflections the flash created on my glasses.  The glare was minimal and I managed to fix this issue in Photoshop.  This is something that can be normally corrected in-camera when looking through the viewfinder and telling a glasses-wearing model how to move their head to eliminate those pesky reflections.  It’s a little more difficult, though, when one is the model in front of the camera, getting the composition in focus with a shutter release cord.

There is so much to learn about lighting for photography.  I’ve only just taken baby steps. More testing will be in my future.  I’ve not only ordered a Westcott 32” white umbrella, but also a Westcott 32” soft silver umbrella.  Oh, and I’ve noticed something else, thanks to my sister pointing this out.  Makeup really helps!  Lipstick, mascara, foundation, blusher all add color and definition and keeps the model from looking washed out.  Compare the earlier images in this post (you can tell the earlier ones because I am wearing a different necklace) to the later ones. 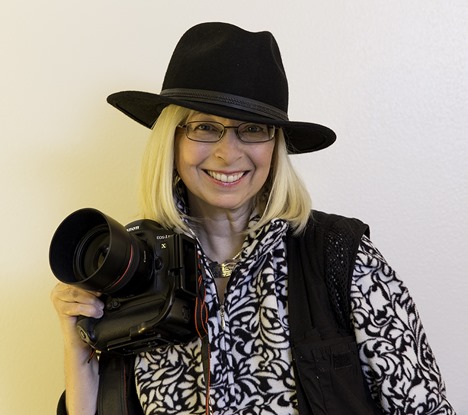 6 responses to “Working On That Flash Photography Thing”