If you read my previous post, then you know I spent my Christmas holiday  in eastern Washington.  This post photographically details the wedding I photographed in Tacoma, on December 28, while still in Washington.

I took the photographic equivalent of the kitchen sink with me:

My brother-in-law was the officiator for the wedding, so on December 27, my sister, bro-in-law, and I piled ourselves and our stuff into their SUV and headed west over Snoqualmie Pass in fog, snow, slush, and rain to Tacoma.

Our hotel was the Silver Cloud Inn, Tacoma Waterfront, with great views of Commencement Bay.  I was mightily impressed with the hotel and would stay there again in a heartbeat (this reminds me that I need to write a review of the hotel in Trip Advisor, to add to the other reviews I have written over the past couple of years). 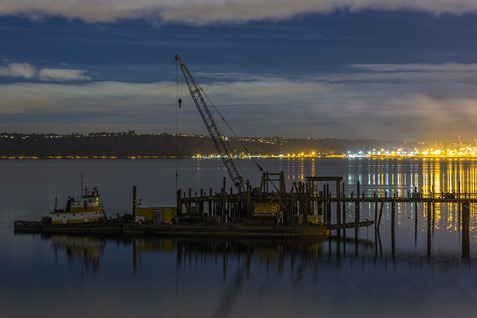 The view of Commencement Bay and the full moon from my hotel window.

Sunrise on Commencement Bay the day of the wedding. 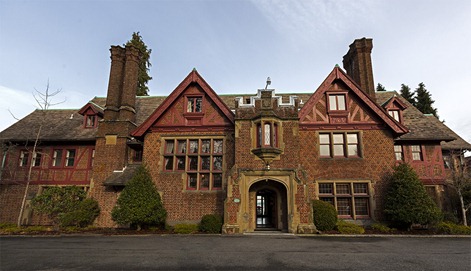 The wedding was held at Weyerhaeuser Mansion, in the Old Town portion of Tacoma, atop a hill overlooking Commencement Bay.

Had the bride and groom not been so entranced looking at each other, this is the view they would have seen from where they stood during the ceremony. 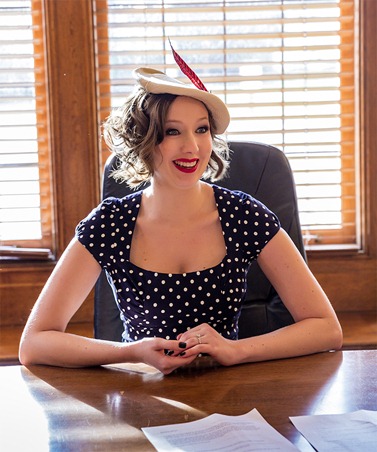 Prior to the wedding, Juliana dressed up in this adorable little movie-starlet outfit and with Andrew, welcomed guests to the mansion.

Andrew getting ready.  I’m not sure how it happened, but his suit had been left back at their home, some 30 minutes and one ferry ride away.  Luckily, the suit arrived and the wedding started on time. 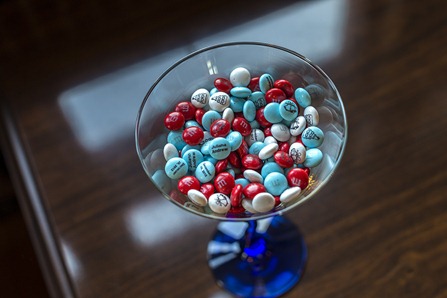 Wedding M&M’s with the date and their names printed on them. 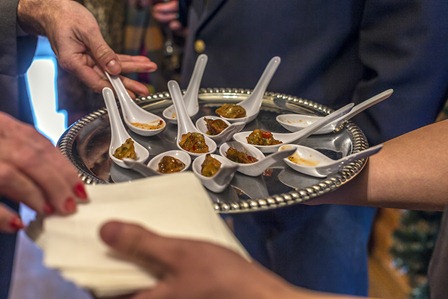 Whenever you are photographing an event such as a wedding, you need to remember to capture images of the little things – the accessories, the decorations, the food/drink served.  These help flesh out the event and add atmosphere.

After Juliana was all dressed in her bridal ensemble, I asked her to stand next to the window so I could capture a portrait of her with the side light, which is one of my favorite  lighting techniques.

I took some of the photos and duplicated them, then used different special effects either  directly from Photoshop CS6, or as one of the presets in OnOne’s Perfect Effects 4 plug in. 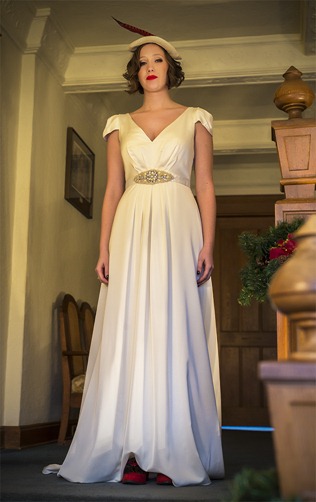 Juliana took my breath away as she stood at the top of the staircase, waiting for me to get my photos of her before she headed down to where her father awaited to escort her out to the groom and officiator.  Her gown and hat matched the character of the mansion and she truly looked like the Lady of The Manor.  In this photo, as well as a number of others, I made use of the vignette effect to focus the eye more on the subject.

Another preset from OnOne’s Perfect Effects 4. 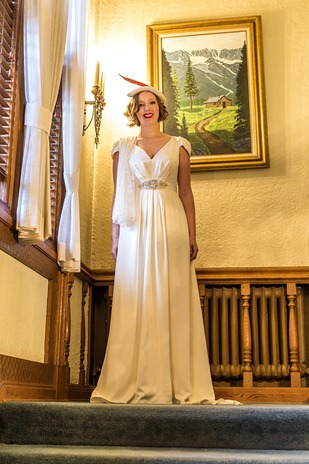 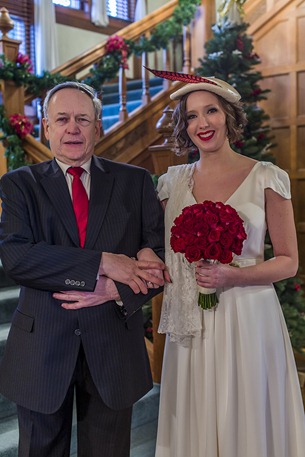 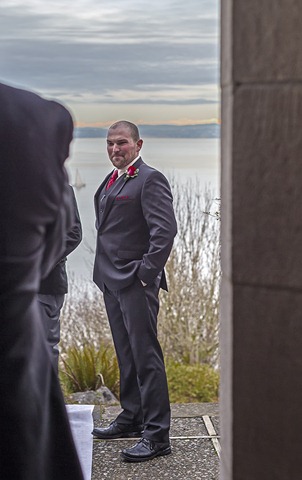 Andrew’s look as he first beheld his bride walking toward him. 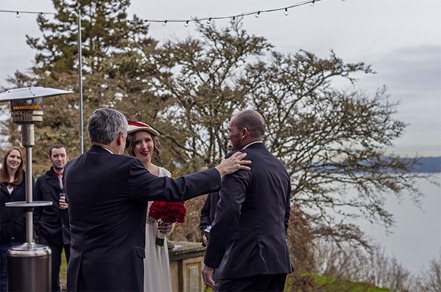 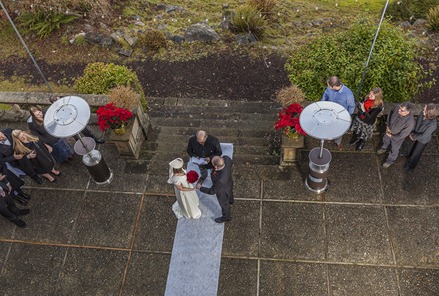 As I was earlier scoping out the mansion for possible photo ops for the bride & groom, I noticed this little room down the hallway from the changing room on the third floor of the building.  The room’s balcony looked directly over the wedding ceremony site.  So, after getting some ground-level images, I RAN up the three steep flights of stairs to get to the balcony so I could capture some overhead photos.  Then, I RAN back down the three flights and managed to arrive just as the bride and groom were kissing. 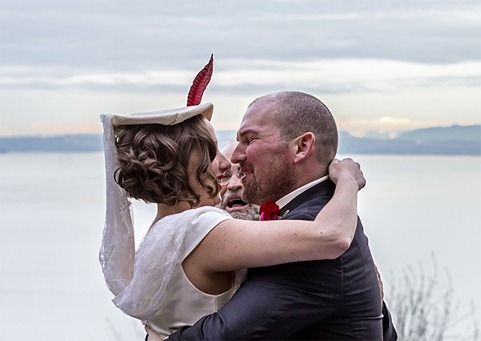 After the kiss, there was a moment of laughter as the groom came away with lovely red lips of his own; the bride’s lipstick color was very bright indeed.  I noticed later on a couple of male relatives with red lip marks on their cheeks.

Introducing Team HOCO (made up of the first two letters each of Juliana’s and Andrew’s last names).

And then it was on to the bride & groom photos, the reception, the toasts, and the cake cutting.

At the gazebo, Andrew turned to Juliana and told her he wanted to sweep her off her feet.  I told him to go right ahead so I could get a photo of it. 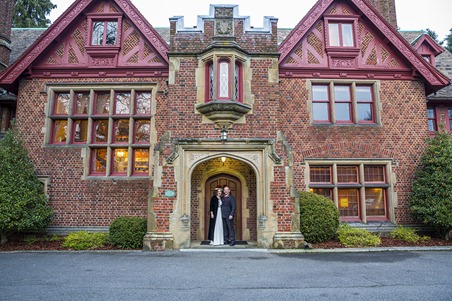 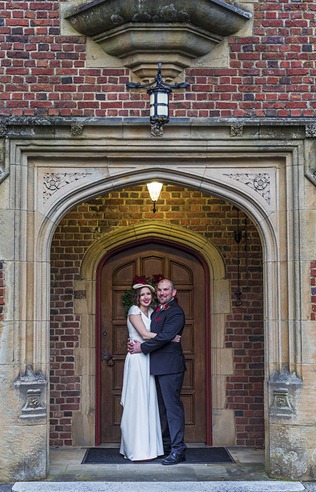 Julian wanted a photo taken without the long black cape she was wearing.  It was a bit “nippy” outside and you can tell in this image.  Good thing she had Andrew’s warm arms around her. 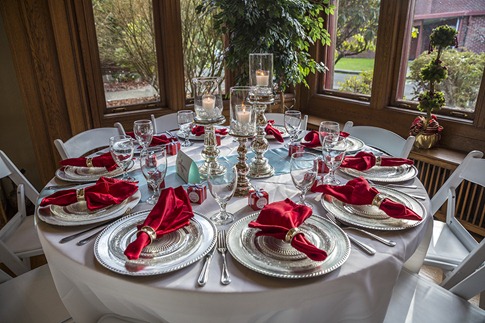 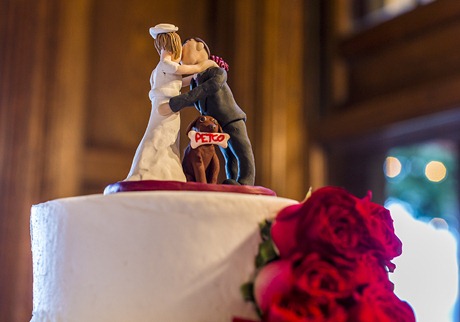 A cake topper made by one of Juliana’s friends.  I’m told she and Andrew first met at Petco. 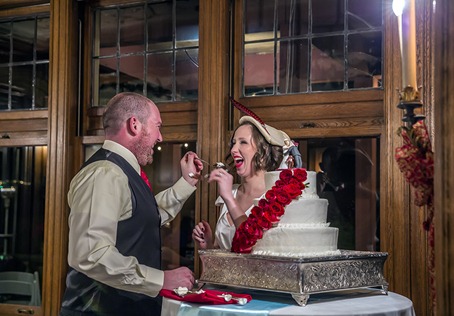 I’m thinking about doing this same “posterized” special effect to copies of a number of other photos, and then creating a little comic book/graphic novel for Andrew and Juliana.  I think any bride that wears red suede shoes with her wedding gown would appreciate something like that – don’t you?

Photographer’s Note:  I used every single one of those lenses at one point in time during the trip, but the three lenses I used most at the wedding were the 16-35mm for the wide-angle shots, and the 50mm prime and the 24-70mm zoom.  I can’t say enough wonderful things about these lenses.  Canon makes awesome glass in the form of their L-lenses.

While I used the flash occasionally, both with and without the Lastolite softbox,  the majority of my images were taken without the flash (I don’t really like using flash much, to be honest, although I know flash has its place and is quite necessary in some instances).  Instead, for my interior low-light images, I increased the ISO, and then used a noiseware reduction plug-in with CS6.

If you would like to see more photos from the wedding, please take a moment and go over to my Facebook Photography Page. And if you like what you see there, then please, feel free to Like me and follow me on my continuing photographic journeys.

3 responses to “Introducing Andrew and Juliana”