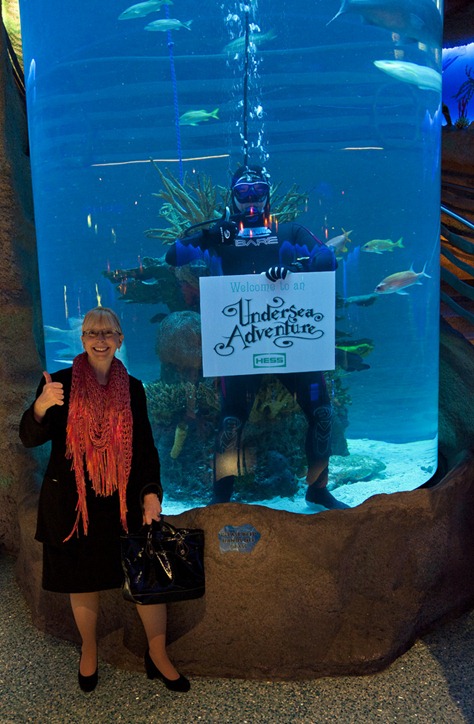 Every year, my company hosts its Employee Appreciation Party.  When I first started working there some 14 years ago, it was a Christmas party held in December.  But, as the company became more global (not everybody celebrates Christmas, you know), and realized that people make a lot of vacation plans during Dec/Jan, the whole party concept evolved and the date changed.

In the past, the annual party was celebrated at  a hotel venue.  This year, my company rented out an entire restaurant (and the grounds around it): The Downtown Aquarium Restaurant in Houston.

I didn’t attend the party last year, but this year’s venue sounded so intriguing, I naturally RSVP’d.  I filled out the little form, indicating I would not be bringing a guest….in retrospect, I should have said I’d be bringing my Canon 5D Mark II as a guest.

Note to you Pixel Peepers out there:  not all of these photos are – well – the best in the world – I’ve included them anyway ‘cause they still give you an idea of the event.

I ended up purchasing a large, black patent leather purse large enough to hold my camera and a single lens, so I brought along only my all-purpose 24-105mm lens.  It served me well, but I give this advice to you readers who are thinking of photographing aquarium images:  use a fast lens (f2.8 to f1.2).  And, if you can, use a tripod.  The largest f-stop on my 24-105 is 4, which means I bumped the ISO up and slowed down the shutter speed.  Yes, I had noise issues, and yes, I had motion issues.  Interior lighting was dim, and fish don’t pose  – they swim.  And, aquatic plant life moves with the currents.  I did the best I could.  I notice in Flickr that many aquarium photos were taken with a 50mm f1.4 lens.

The Aquarium is a three-story restaurant/aquarium with three floors of drinking, dining, and fish tanks. 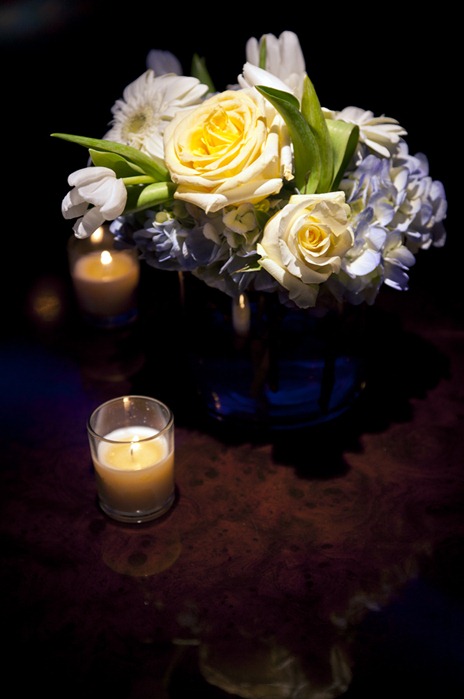 When one gets tired of eating, drinking, and watching the scuba diver feed the fish (btw, that glass is 5 inches thick), 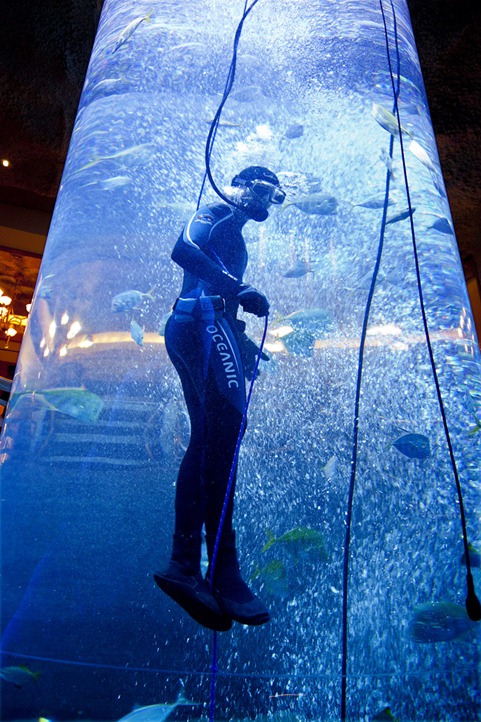 one can go back down to the first floor, exit the restaurant, and tour their “mini-aquarium” via a separate entrance.  Thanks to it being our company party, everything was free and  included admittance to the mini-aquarium, the white Bengal tiger enclosure, the rides – ferris wheel, carousel, train ride through the shark tanks, and some other crazy ride – and the arcade area.  On a regular day, everything at that place has a fee.

This is the view from the 3rd floor balcony, location of their more formal dining area. 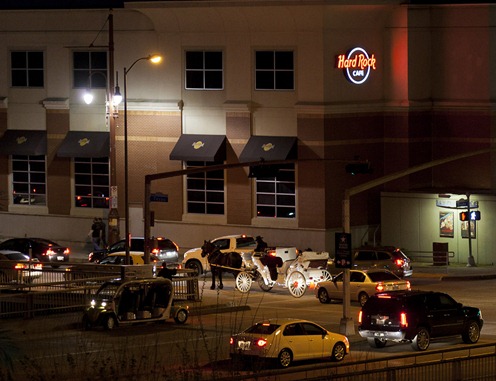 It was a chilly night, so these things emitted a lot of heat and were kinda neat, too. 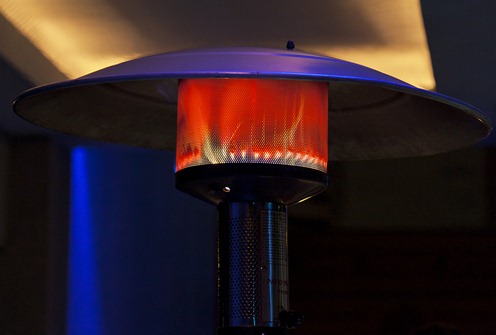 This is a train ride (which I didn’t take and now wish I had) moving its passengers around the perimeter of the grounds and underneath the shark tanks, so that you can see sharks swimming around overhead.  Hindsight is 20-20; if I ever go there again, I’ll ride the train. 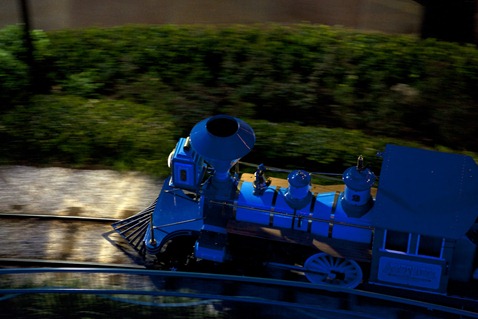 Following are photos taken within their mini-aquarium exhibits.  I found out later that part of that tour is devoted to snakes and spiders.  I didn’t see that particular exhibit becuase it was located in a room off to the side which escaped my notice. Too bad, because a tarantula photo might have been an interesting capture. 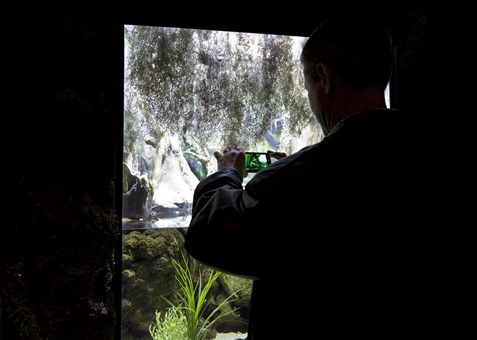 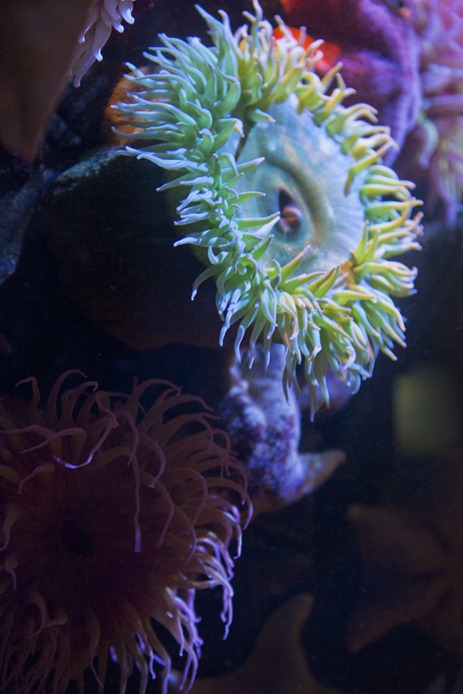 Poison dart frogs.  The most dangerous things are usually the most beautiful. 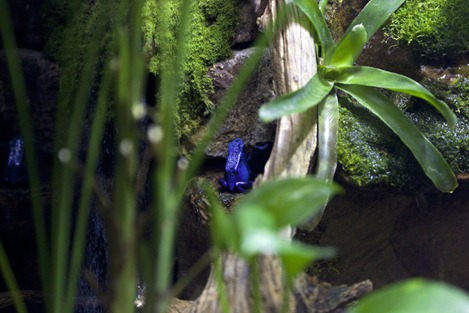 Specifically for the party, the restaurant had set up various drink stations in rooms off to the sides of the aquarium tour route, and in other out-of-the-way locations.  I took this photo of stacked wine glasses along the aquarium route, across from the mock-Mayan (Aztec? Incan? Toltec?) aquatic ruins.  They wanted to make sure we founded good uses for our two drink tickets the company gave to us.

My friends and I wended our way to what I call the “aquatic petting zoo”, where we could pet the sting rays.  I thought that was totally cool!  Those rays were like dogs! As instructed, we used a single finger to stroke these creatures, and when we stopped, they would clamber up for more.  The docent told us stingrays are social creatures and gathered around where ever the humans were standing (of course, I’m sure it didn’t hurt that they probably associated humans with food provision).  Stingrays feel soft and sort of “gooshy”. 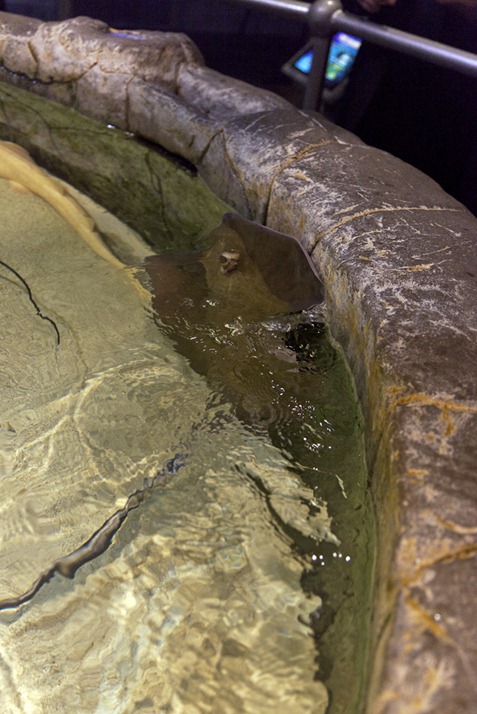 One of the highlights of this little self-tour was the white tiger enclosure.  Ok, I admit, I don’t like going to zoos because it drives me crazy to see large animals in small enclosures (although I’ve been told things have changed since I last visited a zoo).  It bugs me to think of these large, wonderful creatures being bored, either pacing back and forth or just sitting looking downcast.  So, it was with mixed feelings that I chose to visit the white tiger enclosure.  But, I really really wanted to see an animal that I would never otherwise have a chance to view.

I was pleasantly surprised at the size and look of the enclosure (remember, this is in a restaurant).  It was pretty spacious (there are other enclosures for the tigers away from the general public’s view), with things for the tigers to do (big balls, water, trees to climb in).

There is a seating area in front of the glass wall (for the protection of the humans, of course).

This is Reef.  He’s a Bengal white tiger, one of five of which the Aquarium takes care.  The speaker gave us some interesting facts and figures regarding these gorgeous big cats.  In the wild, they have a life span of about 10 years, while here in captivity, they can live up to 20 years – makes sense, as there are none of the survival stressors in captivity that the cats have out in the wild.

To me, they looked healthy, non-bored, and not nervous.  Reef, as a matter of fact, has no problem posing for his adoring human fans.  And I had a front row seat with a zoom lens and a full-frame camera.  So as you can see below, I had great fun capturing images of this gloriously beautiful guy.

From the tiger enclosure, my friends and I wandered outside to the rides and arcade area. 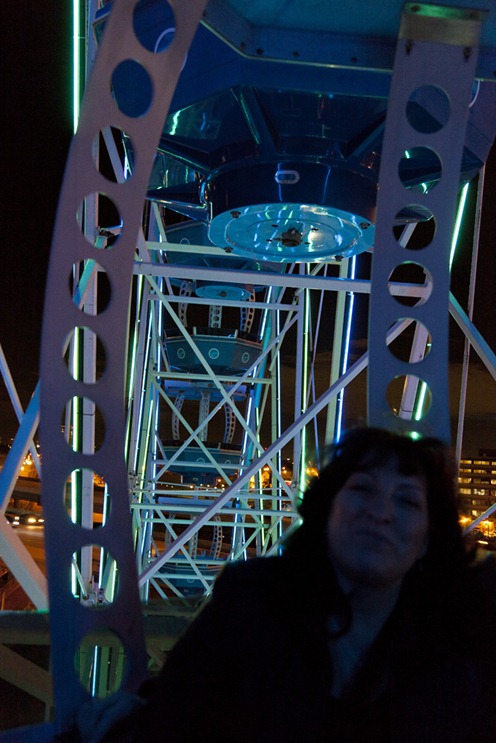 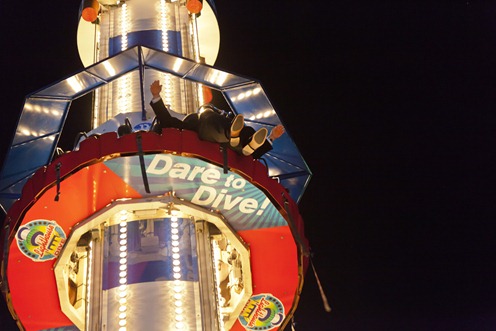 After my friends and I parted ways, I stood in a verrrry long line waiting my turn for a photographer to capture a photo of me – we were promised a free 5×7.  After about 10 minutes of waiting, I decided I could do without the free photo.  My feet were killing me (damned heels ).

Happiness is a pair of white tiger house shoes.

As I was hobbling toward the valet parking, ready to go home after 3-1/2 hours, I noticed a fellow employee wearing white tiger house shoes (I call ‘em slippers) with her party dress (photo above).   After snapping a photo of her clad feet, I asked her where she got those comfy-looking things.  She told me she was not too proud to be wearing these with her dress, and remarked that very few people could successfully carry off that look; she could, of course, and probably I could too, if I decided to purchase them at the gift store.

So I hot-footed it (oh yeah, my feet were on fire) over to the store and purchased a pair.   My feet thanked me profusely as I wandered around the restaurant’s lobby on my way out to valet parking.

I had a great time at the party and hope they use this same venue next year (because by then, I’ll have a faster lens, more comfortable shoes, and will visit those areas I neglected, in addition to re-visiting places I photographed this year).